Quest is perhaps the largest sculpture ever created in the modern era, it features five nudes three women, one man and a baby together in a fountain, this piece was carved from this 200-ton block of pure white Pentelic Greek Marble seen below.

Count Alexander von Svoboda had this 190 ton hunk of marble quarried in Greece and he made THIS with it…???…!!!

Count Alexander von Svoboda and his maquette of Quest.

It depicts the growth of today and tomorrow and the awakening to the future.  I wanted to have complete contrast between this piece of sculpture and the Georgia-Pacific Building.  The sculpture is designed to lead the beholder to look towards the middle of the building and then up.”  -Alexander von Svoboda on the statue Quest. 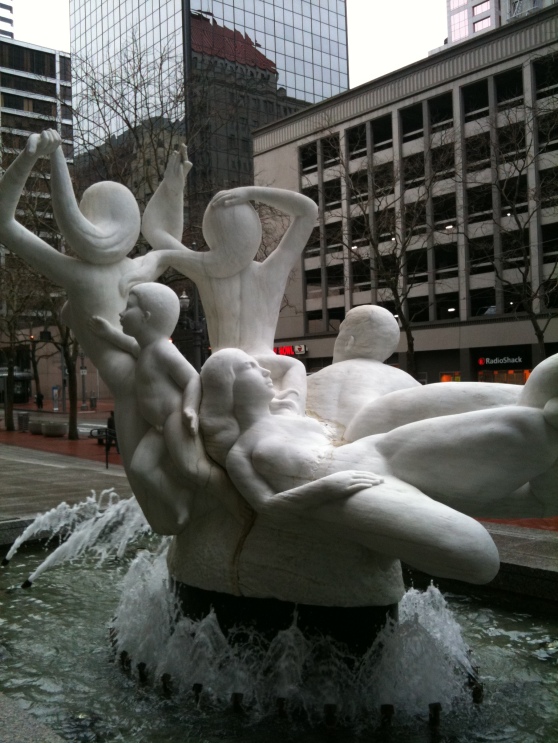 All five groins in the fountain

Hovering over a frozen pool “Family Night at the YMCA” 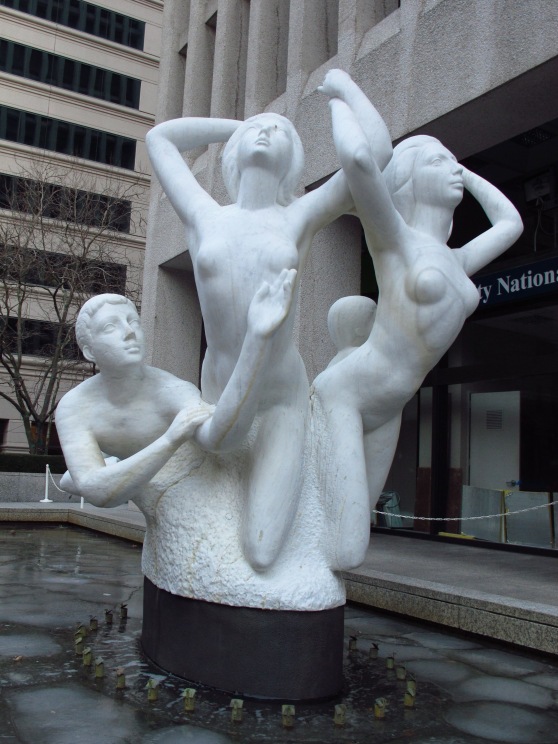 Three of the Groins in the fountain

The pretty one in a recline.  Closed eyes makes for a less creepy pupil-less,vacant stare as seen on the other four.

the malformed feet of the child on the Quest statue.

These Oregonian articles recount the unveiling of the Quest statue and reactions to it.

Years later when Georgia-Pacific left Portland for Atlanta some hoped that they would take von Svoboda’s works with them.

Another piece of art installed at the same time on the east side of the building was Perpetuity also by Count Von Svoboda which was a giant cross section of a redwood tree hollowed out, petrified and embellished with a bronzed sapling tree placed in the center.

Being one of the most hated piece of art ever installed in Portland, Perpetuity has long since been removed, since about the time that Georgia-Pacific left the building.  The lights that would have lit it up from below are still there now just a circle of unused lights around nothing.